TODAY’S BREW: I’d like to mix the new St. Ives Coconut and Coffee face scrub with milk and drink/chew it, but today it’s just Folgers.

First, I promised you a Julie Factoid every new post, so here you go:

IRON MAN IS AND HAS ALWAYS BEEN MY FAVORITE MARVEL CHARACTER AND WHEN ROBERT DOWNEY JR. WAS CAST FOR THE MOVIES IT WAS LIKE MY WHOLE LIFE FELL INTO PLACE. Also, huge comic geek. More on that another day, because I can’t get a Batman story out of my head and will probably write a book about it.

What I’m here for today is to ruin whatever you may have imagined my first book, RUNNING HOME‘s hero, Nicholas French, to be based on. YOU GUESSED IT, ROBERT DOWNEY JR./IRON MAN because they’re the same person.

Nicholas is a celebrity among the Shinigami vampires. (If you don’t know who the Shinigami are, you probably haven’t read the book, so, HI NICE TO MEET YOU BUY MY BOOK.) He’s a classic ‘men want to be him and women want to be with him’ golden boy that does everything just a little better than everyone else, and never lets you forget it. One of those guys that everybody likes almost as much as he likes himself. Sincere underneath the sarcasm that will bite your face off, what you see is what you get with Nicholas, once you dig deep enough, if you get that close. You might think you’re that close, but you’re not.

He may look really good in a tux, but he’s a lot more of a thermal shirt, t-shirt, shirtless guy, living deep in the woods in a cabin he and a few of his fastest friends built, filled with a bunch more stuff that he built, all of which help hide him away when he can’t take being Nicholas French, public spectacle anymore.

His connection to Ellie is evident right away. Only he knows why, and he’s not telling. It makes things agonizing for Ellie, a damn fine introvert, having to trust Nicholas when he says the complexity of their feelings will make sense one day. Nothing ever makes sense for Ellie, but Nicholas doesn’t underestimate her for a second. Oh look, here she is now:

So when Nicholas shows up, filling all the gaps she lives with, she wants answers and doesn’t believe them half the time. This is pretty smart because Nicholas loves a vague and self-deprecatingly pretentious riddle.

As usual, Nicholas knows what’s best, and the rest of us are just along for the ride. Well, we’re driving, but he’s telling us where to go.

So, if you had another vision of him, sorry. But this charming, painfully witty, well-read, martial artist extraordinaire is Nicholas French in every aspect, right down to his voice and eyes that can almost make his snarky comments for him. He’s perfect. And like any perfect man, he has depths that stay hidden even from him at times, making him not just another pretty face. And arms. And hands and abs and thighs.

I love that Nicholas believes so much in Ellie, that he refuses to treat her as the nobody she’s tried to become so she won’t have to face the feeling that she’s actually somebody important. He won’t let her fail herself that way any longer. And I love that he doesn’t hit her over the head with constant flattery. He knows she’s better than that. Compliments don’t go far with her. Their relationship is odd, ugly at times, but to make it anything less would be an insult to two such thoughtful characters.

(If you want to get to know Nicholas a little more, go get yourself a FREEBIE STORY called STANDING STILL. https://www.instafreebie.com/free/IBPMb.

Seriously, free. The site is called Instafreebie, for Chrissakes. 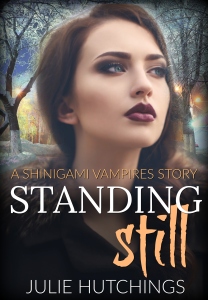