TODAY’S BREW: “Regifted Brew,” which is an actual thing I got at Big Lots.

HI. I fall off the planet all the time, and like all bloggers and writers and people, it seems, I always apologize for it, like I have to SHOW UP TO LIFE or something. Even now I want to give a reason why I don’t blog on a regular schedule, or make excuses about why my social media presence has been spotty at best, or even why I’m not writing consistently.

But I don’t have to do that.

You don’t owe someone your presence. Presence by its very nature requires that you ignore all the other things considered a constant presence. Like Twitter and Facebook and Tumblr and blogging and emailing (non-urgent), and all that garbage that does indeed serve a purpose, but makes us servants to it.

Presence is living your life, the thing that fulfills you so that those other “presences” are not a responsibility or time owed.

There’s a term, “shadow of a leader.” Means that the culture is that of the leader. Means when that the team (in this case, my readers and followers and friends, people I affect), feel the leader’s influence even when the leader is looking the other way. A sort of “what would Julie do” overall feeling.

Now, I am an egotistical bastard, but even I know the world doesn’t usually think “what would Julie do,” but I work at being an inspiration, a motivator, through my words, my books, my actions. So yeah, it matters to me that people look to me as a guide. That’s what a leader is–someone who cares how their people live. And you guys are my people. And I am a leader.

So in this last period of falling off the planet, it wasn’t because of anything, as much as I feel like I should explain myself. There was nothing wrong–in fact, everything is great. Christmas was the best one yet for our kids. Truly magical. I feel FANTASTIC. That surgery has made me whole by taking things out. My family is happy, my home is cozy, and I’m enjoying the hell out of it. It’s not always about doing things. For someone who is always doing things, this is a little odd sometimes. Because I did stop doing things. I haven’t written, haven’t done much in the way of promotion, my book schedule is totally off…

And looking for the first time in too long at my book sales, I found that yeah, they obviously suffered, but you know what? Nobody died.

I stopped doing stuff and nobody died. The planet still turns. The birds keep chirping, the air keeps…airing. Then my buddy on Twitter did THIS. 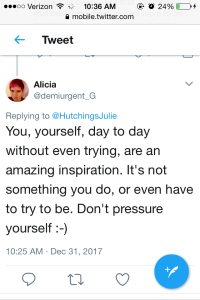 I said at one point that I’m not failing–I’m learning what I can do. The state of the universe doesn’t rely on “launch day.” Life is a launch.

It’s fabulous to feel like all the doing of things eventually means like I don’t always have to be doing things. That the doing has led to done.

Oh, I’ll never be done with promo and writing and editing and writing more and the world of the indie author is stuffed to bursting with the things that can be done. But I can do it at my own pace, and eventually it will lead to the resting period where I’m enjoying the journey as much as I’m working to trespass it.

There’s a difference between being lazy and taking a break, I’ve always said. I’ve taken a much needed break. But instead of getting back to the grind until I’m falling over myself to take a break again, now I can do my business at a pace where I’m okay to work myself to the bone, let myself fall into the wonderfully taxing writing where I can’t think or breathe anything but that book, and then take a day or a week off to do all the other stuff. The world won’t end if I’m not doing all of it at once. On the contrary, the world of the Shinigami vampires has, in effect ended, because I was juggling too many balls to give the last book all of the obsessive, filthy-haired, pajama-wearing, crap-eating attention it craves. I crave. A day where I just write. I haven’t had that in….I can’t remember the last time. Where there was no time limit or word count limit so I could move on to something else. I don’t want to give my world 50%. I can’t and expect it to be a world of limitless proportions.

I’m so frigging excited to CREATE Crawling Back now, and I haven’t been. I confess, I haven’t been. But this time of refusing direction has put me in the spot again where I’m begging to write a damn good book.

So for 2018, which I, like everyone on Earth, have longed for, my resolution is to be. Be present in whatever I’m doing, stop self-induced juggling. Take the long, steady road instead of building a mountain and trying to climb it at all costs, fighting to face a demon of my own creation on the other side.

My new year isn’t about changing. It’s about being, and being better at being.

And I want that for all of you, too. I want that to be the shadow I cast this year. Be the beast you can at being. Be good–not just okay–with not pushing. Be happy at succeeding, in all its stages–not just at being a success. Treat yourself like an adventurer, not a slave.

OH, if you like that little motivational reminder, I put one like it on a coffee mug. A quote from my dark fantasy, THE WIND BETWEEN WORLDS. 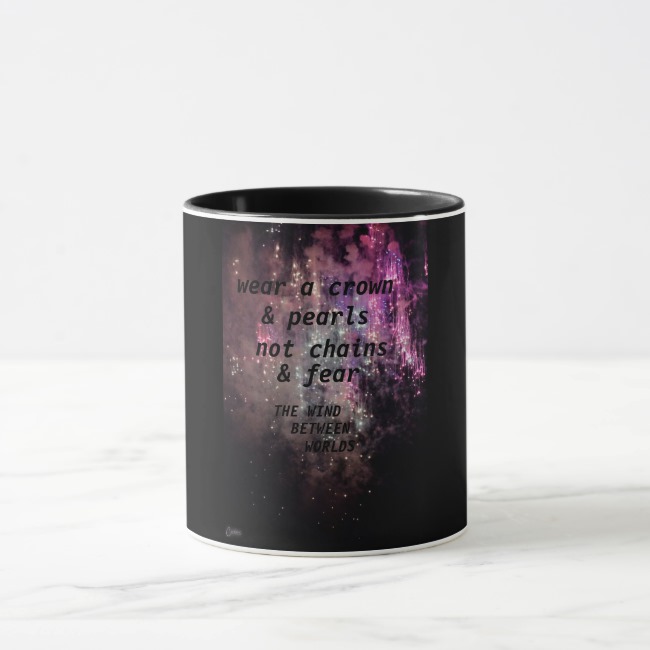 wear a crown and pearls, not chains and fear

Let this be your reminder in 2018 to be exactly who and what you want to be, even if–especially if–you’re that person already.

(if you’re so inclined, and do be, because reading is how you get better at every damn thing, here’s a link for THE WIND BETWEEN WORLDS: The Wind Between Worlds by Julie Hutchings https://www.amazon.com/dp/B076PXGHQT/ref=cm_sw_r_tw_dp_U_x_5qPsAbBW81N59  )

Be who you are.